Achievements of the Master Plan of Societal Security Studies

The center for society and security studies is honored to announce that master plan of societal security studies has been fulfilled successfully and considering its significant achievements and satisfying the main demands of benefic institutions and organizations, this plan has promoted to a macro-national plan and enacted as one of the thirty eight prior macro-national plans by the Supreme Council of Science, Researches and Technology Ministry and promulgated to be executed and honored to be the first macro-national plan enacted by mentioned Supreme Council in the field of Humanities.

The beneficiaries of the plan’s outcomes include some institutions such as Home Ministry, Police Power Administration, Bureau of National Security Supreme Council, Management and Programming Organization and the National Exigencies Council some of which submitted their requests to access the research results later to the Center for Society and Security Studies and handed out their material and immaterial supports. In fact, the transition from master plan to the macro-national one occurred by paying attention to the four main approaches:

Along the course and at the executive process of master plan of societal security studies some inquiries have been accomplished which are listed below:

- Inquiry plan named “analysis of the societal and cultural consequences brought about by the increasing penetration of internet on the societal security in Iran and accurate strategies toward it.

- Inquiry plan named “analysis of the crisis affecting Iran societal security in the interval of 2007 – 2008; causes, processes and experiences”.

Producing the wide range of scientific literature in the societal studies in country is one of the main and significant achievements of the master plan of societal security studies which has been unprecedented. The outcomes of the plan include nine volume newly published books which are listed below:

2. An Introduction on Societal Sociology.

3. Principles and Issues: An Iranian Approach.

4. Historical Sociology of Security in Iran.

8. Societal Security from an Islamic Point of View.

In addition, some complementary measures took place among which writing 13 scientific articles, translating foreign texts (3 volume), holding more than ten scientific meetings, founding a information bank in the mentioned field and creating a website addressed www.csss.ir are some cases to be implicated. 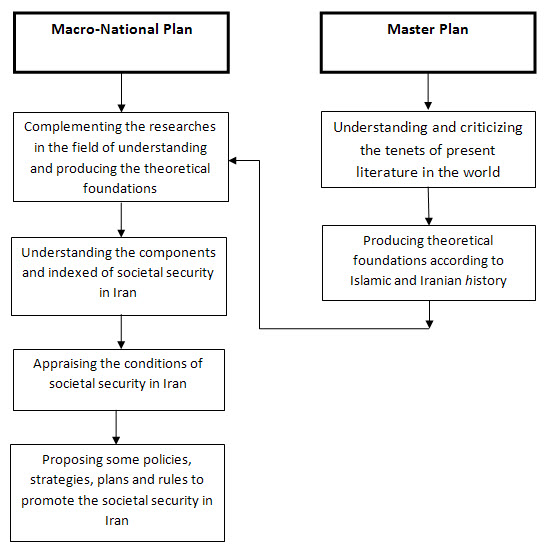